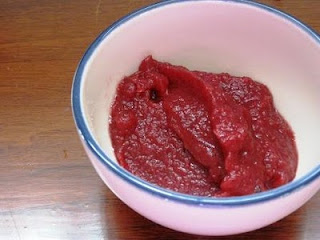 I mentioned this concoction in a couple of posts in the (northern) autumn, but I’ve been making it so much over the past few months that I thought it deserved its own entry. The original idea wasn’t mine; I came across it on someone else’s blog, but have never been able to find it since. So, if you’re out there, mom/food blogger who posted about this sometime last September, thanks for sharing your concept and rhapsodizing about the beautiful magenta color of the finished product. I don’t know if my recipe bears much resemblance to yours, but if it does, all credit goes to you, wherever you are.


Slow cooker blackberry-apple butter
I use this in the middle of batches of Oat-Fruit Bars; stir it into Greek yogurt and top with Groovy Granola for breakfast; add it to quick breads and muffins; serve it with roast pork for Sunday lunch; and, oh yes, eat it straight out of the jar when the mood strikes. I canned some of the last batch and shared it around.

Grease the inside of the slow cooker insert thoroughly with the butter, and turn on to heat on low.

Roughly chop the apples—do not peel or core. Toss in the slow cooker and spread out to even depth, then pour in the apple juice or cider. Cover and cook until soft and mushy, at least 2 hours.**

When the apples are fully softened, shut the slow cooker off and toss in the blackberries. Cover again and allow the mixture to cool somewhat; this residual heat is enough cooking for the blackberries.

When sufficiently cool to handle, scoop the mixture out in batches and puree in the food mill. Make sure you scrape the slow cooker insert as clean as possible, since you’ll be using it again and don’t want any stray bits in it that should have been caught by the food mill. (You can wash it if you want, but I never do.)

When the slow cooker is empty, turn it back on to low heat. Give the pureed mixture a good stir to make sure it’s consistent, and then dump back in the slow cooker. Put the lid back on at an angle, so that moisture can escape and the mixture can cook down from sauce to butter; this will take at least another hour on low.

When mixture has thickened to your satisfaction (I stop when my spoon leaves a trail across the bottom of the slow cooker), season to taste with cinnamon sugar and cardamom.

Can be stored in the refrigerator or canned in jars using the boiling-water method for 10 minutes.

* I can’t remember if ‘punnet’ is a term used in the US as well as the UK. What I mean is one of those little plastic containers of berries that are staggeringly expensive in the northern hemisphere at this time of year. You can substitute an equivalent amount of frozen berries should you so desire.

** Cooking times and yields are fairly vague because I cook this on low on purpose so that I can work it around my schedule instead of the other way around. You do have to keep an eye on it somewhat during the last stage, otherwise the edges touching the slow cooker may scorch.
Pin It
at 1:56 PM

Hmmmmm - apple butter is something I miss very much from home. My mother brings or sends over care packages with apple butter from GA. And, blackberry-apple butter sounds amazing...

So does this mean the German authorities allow jars of apple butter (or, say, blackberry-apple butter) to be mailed in?