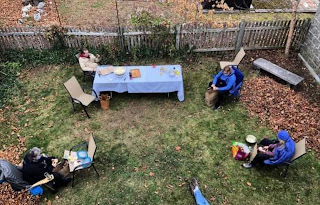 Photo credit to a sister who was there - I was only a virtual participant!

This past Sunday was Pie Day - a family tradition that has endured for decades and which I can’t believe I’ve never written about here before. At its peak of production, my parents, sisters, and I gathered on the Sunday before Thanksgiving to crank out more than two dozen apple pies for our large extended family and to serve on the day - homemade crust made in a washtub by my mother, apples by the bushel peeled and sliced mostly by my father. The tradition itself starts with my mother and her own mother, somewhere around 65 years ago, before any of my generation came along, tackling an American custom and making it their own.

Last year I spent Pie Day in Boston with my siblings and niblings for the first time in probably 20 years. This year, of course, everything looks different, but we adapted. Most of my Boston sisters gathered in sister S’s backyard to assemble pies in the frosty air, while those of us who were remote zoomed in from possible-exposure self-quarantine (no symptoms so far), Chicago, and metro DC (yours truly). We produced a total of 10 pies across our various locations - all apple, as usual (we’re not pumpkin pie people).

My pie specs, for anyone who’s interested: a double batch of this amazing pie crust and a dozen Granny Smith apples tossed with sugar, cinnamon, and nutmeg and sprinkled with lemon juice. And so, come what may (and please let 2020 not have anything left in its arsenal), the holiday season begins. 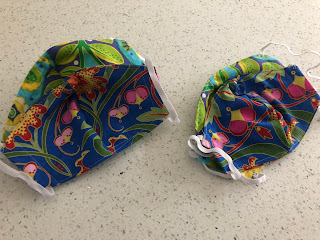 Today marks 8 months of quarantine. School was initially canceled for Miss B on Friday, March 13th, and for me that marked the beginning of this interlude. Here we are at our second Friday the 13th of 2020, and pandemic-wise at least, things are worse today than the conditions that sent us all into lockdown back in the spring. And with no end in sight. Even with a coming change in presidential administration, I do not see a way that things are going to get measurably better in containing the spread for a long time to come.

Things haven’t changed much for us: we are all managing school or work from home. DP and I have been going to the gym during off-hours, although I suspect that may change again soon, and I go to the grocery store and the farmers’ market. Other than going out for walks or drives, and the occasional small outdoor social gathering, we have been hunkered down at home. Luckily Miss B and I are homebodies, and DP has adjusted reasonably well, so we're coping.

Email ThisBlogThis!Share to TwitterShare to FacebookShare to Pinterest
Labels: ffx, nova, other details

Today's the day, friends. Time's up. Whatever else you do today, if you haven't already, please, please vote. Email me (roving lemon at yahoo.com) if you need information on where to go and I'll try to help you out.