Nearly four years ago I wrote a post about how stressful I find waiting, at a time when I found myself in a state of limbo, awaiting significant outcomes over which I had no control in my personal, professional, and national life.

Well, here I am again - and it doesn't feel as though I've gotten any better at being zen about waiting. Possibly even worse, at least at the moment, compounded as it is by grief. My current strategy is something I call "meticulous mindfulness" (or would "mindful meticulousness" be better? I can't decide), by which I mean that I am trying to focus on the things that I want to accomplish each day, and then trying to give each of those things my full attention. In the short term, when I can accomplish it, it stops the hamster wheel in my brain from spinning; and in the long term, I hope it adds up to a period of sustained accomplishment and satisfaction, rather than one of fruitless frustration.

So: this morning, I woke up early for Sunday, slightly jetlagged after returning from my second trip to the US in two months (this one, a family trip, was the one I had been planning to take this year). I lay in bed and thought about what I wanted to do with this unexpected block of time. Did I want to stay in bed and read, enjoying having nothing to do after three weeks of non-stop activity (including stops in five cities)? Or did I want to tackle some task on my monster To Do list?

I split the difference - I read for a while, and then I got up to bring my blog up to date. Here's some recent happenings, aside from what I've already told: 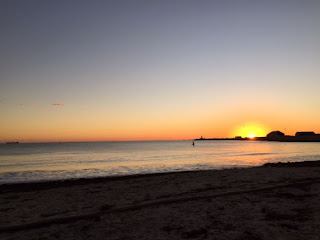 An impromptu family trip to Perth and the southwest corner of Western Australia during July school holidays that almost didn't happen, between DP's travel schedule and my father's hospitalization. But it did, and I'm glad we managed it - as well as this, which was on Miss B's must-see list: sunset over the Indian Ocean. Our last night before we flew back east, we went down to the beach in Fremantle and sat there to watch it happen. 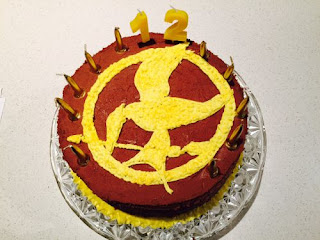 The saying goes that in the midst of life we are in death, but the reverse is also true. My father died five days before Miss B's twelfth birthday, and I flew to Boston the day after. We had a family dinner and cake on the day with a few close friends, and with the help of some of the aforementioned meticulous mindfulness I was able to give Miss B the cake of her twelve-year-old dreams, even if I didn't manage a birthday post. 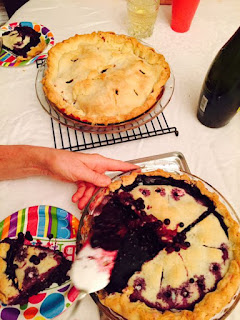 And to continue the theme: my oldest sister's birthday was the day after my father's funeral, and for my gift I made a birthday dinner, for her and all available family members. For dinner we had spaghetti al'amitriciana three ways: the standard version, as outlined in this post; a batch made with gluten-free pasta, for the GF contingent; and a vegetarian version for the birthday girl, substituting fried halloumi for the bacon. For dessert we had her favorite treat: birthday pie. I tested out Nigella's GF Pie Crust (a smashing success, even made under sub-optimal conditions in someone else's kitchen) and made maple-blueberry for the birthday girl (who doesn't eat refined sugar), and peach-raspberry for the non-blueberry fans.

That takes us up to early August...more to follow soon.