Hello! Please insert standard apologies for another long silence here, along with reassurance that I thought often, if not every day, of this blog and how I wished I was posting to it. (Not that that made any visible difference, but maybe it gets me some karmic brownie points for good intentions?)

Anyway, here's a snapshot of what I've been up to since Easter, which may help explain my lack of blog-related focus and posting.... 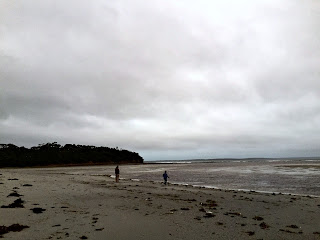 A few months ago, we decided spontaneously to organize a fun mini-break at the beach during Miss B's April school holidays, figuring we'd get some lovely mid-autumn weather. Instead, we timed it perfectly to experience the 'storm of the century' which battered Sydney and the surrounding coastal areas for three days, dumping something like 20 cm/12 in of rain in 48 hours on the town where we were staying. Luckily we had brought lots of videos and we never lost power, unlike a lot of other people. We even managed to sneak out onto the beach between storms a few times to admire the moody skies and gigantic, terrifying surf. (Full disclosure: I am quite likely to find Australian surf terrifying even on a regular beach day.) 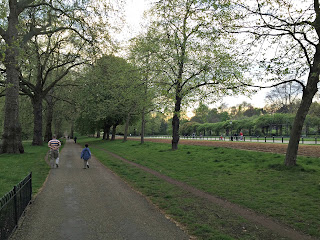 ,
Sometime after we had already booked (and paid for) the abovementioned mini-break, another travel opportunity came along that we couldn't (and decided not to) refuse. The good news was that it meant we got to spend a week in London as a family. The bad news was that it came up at pretty short notice, and required that we fly out of Canberra two days after getting back from the coast. Fun! Well, the getting-there part, not so much; but the being-there part was fun - even the parts like this: wandering in Hyde Park on our first evening, trying desperately to stay awake until bedtime and taking in a few sights along the way. Other highlights of the week included taking Miss B to my favorite British museum, the V&A, for the first time (a success) and attempting to take her into a pub to meet some of my colleagues (a failure - they chucked us out on account of no children being allowed in after 5pm!). 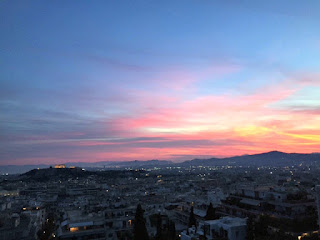 Part of the reason that the London trip came together is that I was already scheduled to fly to Europe - when the week was over, DP and Miss B flew back to Australia, while I went on to Greece for a week-plus of work meetings. (Yes, my job is very gruelling.) Here's a view of one of many glorious sunsets I witnessed with the Parthenon looming picturesquely in the middle distance.

Needless to say, with all the travelling and other stuff going on, I haven't done a huge amout of cooking in the last several weeks (although I did eat some pretty amazing food in Greece, particularly at this place down the street from my hotel, where I think I ended up eating at least one meal every day that I was in Athens). But I have still found the time to become enamored of two things new to my kitchen: 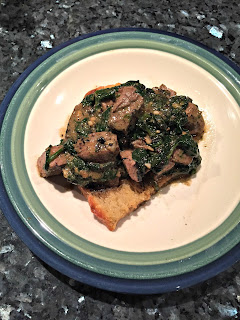 1. Fried toast. Inspired by this post on food52, this has become my go-to vehicle for gussying up leftovers. The photo above may not look particularly earth-shattering (have I mentioned winter is coming in Canberra, which means no more natural light for dinner photos for a while?), but any kind of sliced bread fried in a pond of olive oil is the perfect carrier for anything involving sauce or gravy. Also stupendous at breakfast time (and a dramatic improvement on fried bread, which honestly I never saw the point of, probably because there wasn't nearly enough olive oil involved). 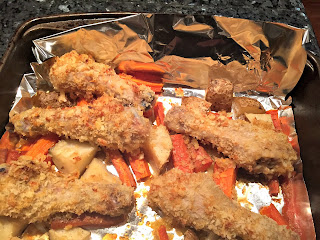 2. Hands-off dinners. (Ah, we come to the point of the post name at last! Did you think I was referring to the multiple-week silence here? Let's call it a pun.) I've been doing some experimenting lately with the whole roasting-pan-dinner concept - as in, you put a bunch of stuff in a roasting pan and put it in the oven, and when you take it out, that's dinner. I'm not sure why I haven't picked up on this concept sooner, especially given how long I've been cooking dinner, but I'm kind of loving it, especially on school nights. This is a current favorite (again with the crappy pictures): chop up some carrots and potatoes and toss with olive oil and seasonings, then place in a roasting pan and stick in the oven at about 375F/190C. While those get going, prep these devilled chicken pieces (the original recipe calls for legs, but I use drumsticks) and add to the roasting pan. Roast the whole business for 30-45 minutes (giving you time to clean up the kitchen, supervise homework, maybe answer a few emails from your boss who just came online overseas - oh wait, maybe that's just me), or until everything is cooked to your liking, hopefully with some brown crusty bits here and there.

And that's the news update from here. Hope all is well wherever you are?