Part 1 of a random selection of things I enjoyed looking at, visiting, or eating on my trip to North America: 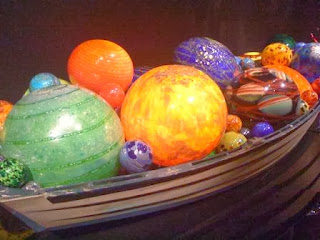 While in Montreal, we had a chance to catch up with oldest niece/cousin Miss I, who is in her first semester of university - at DP's alma mater, no less. It was fun to revisit some of the haunts of our college years, as well as see what she's discovering. And despite the amount of time I've spent in Montreal over the past 20 years, I'd never been inside the Art Museum until this trip, when Miss I, Miss B, and I went to take in a fantastic Chihuly exhibit while DP was off doing academic things. 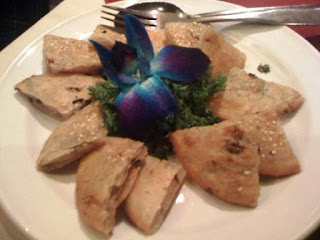 My favorite Chinese restaurant of all time was Elysée Mandarin, in Montreal; it closed many, many years ago and is still lamented (perhaps that's why it still shows up on Montreal restaurant listings, even 15(?) years later). On our last visit, last year, we at last found a worthy successor, so Miss B and I took Miss I there for dinner after the museum and an afternoon of goofing off. It did not disappoint, including yummy scallion pancakes (which are really hard to come by in Australia, for some reason) and exotically colorful flower garnishes as part of the presentation. 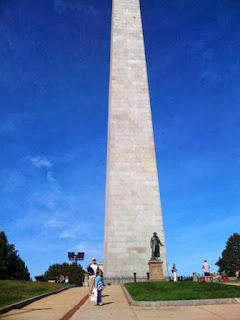 After bidding a fond farewell to Miss I and Montreal, it was time to head to Boston for two weeks packed with family, friends, and local sights. We kicked off the first week with an afternoon spent walking a good chunk of the Freedom Trail (perfectly timed, as it turned out, to avoid the US government shutdown that started the following day) and taking Miss B for her first encounter with some of Boston's most famous Revolutionary War landmarks. We started off in Charlestown, at the Bunker Hill Monument (pictured above), then the USS Constitution at the Charlestown Navy Yard... 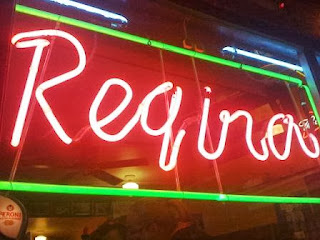 ...then crossed the bridge into the North End to visit the Copp's Hill Burying Ground, the Old North Church, and Paul Revere's house. We had planned the whole expedition, at my insistence, around finishing up with dinner at the original Pizzeria Regina in the North End, my sentimental favorite. Sister/aunt M joined us for the expedition, and two brothers/uncles and a dad/grandpa further swelled the ranks at dinner. 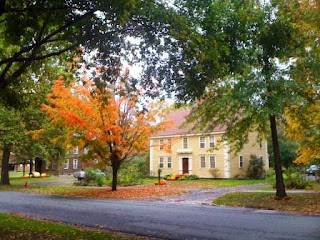 Later that week, we continued the historical theme (kind of unavoidable when you're married to a historian) with a trip to Historic Deerfield while on an overnight to visit my sister-in-law R in western Massachusetts. Highlights included a one-room schoolhouse, a discussion of open-hearth cooking, and getting a real sense of how this quaint and quiet settlement was once precariously perched on the frontiers of European settlement in North America. 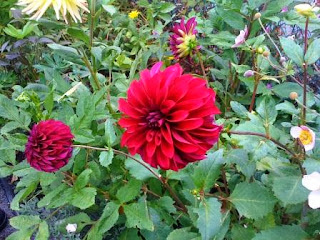 One of the things I really enjoyed about this trip was getting a taste of New England autumn, absolutely my favorite season any time, anywhere. I haven't experienced proper New England autumn for about 10 years, and I soaked up as much as I could, including vistas of foliage in Quebec and northern Vermont and fall flowers further south, like these gorgeous dahlias on the Bridge of Flowers in Shelburne Falls (another highlight of our western Mass. jaunt). 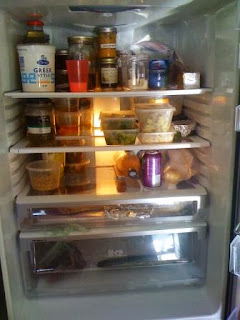 Since my fridge is rarely ever this a) neat or b) empty (yes, that is empty by my standards), I thought I would take a picture for posterity before I get back to cramming it full of farmers' market booty and leftovers.

All of which is confirmation of the fact that I am back in Canberra, having managed one measly post during the entire five weeks I was away. After the brief breathing space during which I wrote my last post, my trip schedule kicked back into high gear, with stops in Montreal, Boston (two weeks, including side trips to western Mass. and Providence), Leavenworth (KS), and Dallas, and visits with multiple family and/or friends in all but the last of those places (where visiting with only one set of friends seemed unimaginably luxurious timewise). Last night I cooked a basic family dinner for the first time since mid-September, and then we were all in bed by 8:30 pm. (Miss B slept 13 hours - if only all jet lag could be like that!)

I'm nearly finished unpacking, and am working on uploading and sorting photos for posting. More to come shortly!
at 5:00 AM 0 comments