March has turned into what the Fantastic Mr. Fox would call a clustercuss, and life, cooking, and posting have suffered accordingly. But there are a few highlights to share: 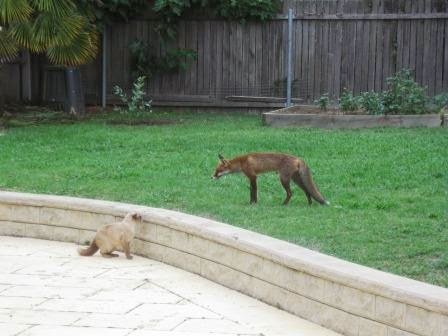 Speaking of foxes....Now that the weather is cooling off, we  are seeing more of the local wildlife - including this recent backyard standoff between 2 invasive non-indigenous species. (Spoiler: despite the considerable size differential, the cat won this bout hands down. The fox slunk away and has not been seen since. S/he had no comment, so we still don't know what the fox say.) 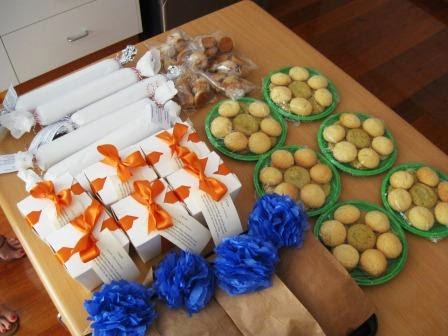 I went to a back-to-school cookie swap which had originally been scheduled as a Christmas cookie swap, but got postponed when the hostess' December turned into an even bigger clustercuss than my March. Highlights from this included lots of delicious cookies, entertaining local gossip, and one attendee's excellent idea to provide her contribution as unbaked dough for freezing and future use (see rolls at top left), an idea which I am totally stealing for future cookie swaps. My contribution features the poofy blue tissue-paper flowers, inspired by Celia when I had to MacGyver up some fancy packaging from supplies I had on hand at the last minute. (My contribution.) 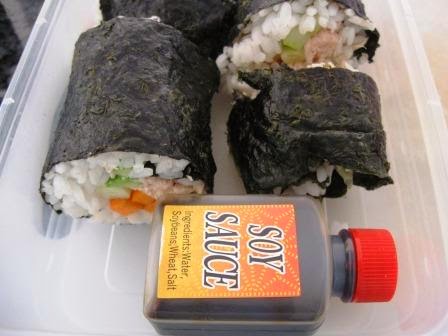 I have become an inexpert maker of inauthentic sushi, as evidenced by my latest batch. The process for basic inauthentic sushi is pretty straightforward - cook some sushi rice; when cooked, season it with sushi vinegar and let cool while you finish prepping the fillings (Miss B's preferred inauthentic sushi fillings are thin strips of cucumber and carrot, topped with chunks of canned tuna). Then assemble, wrapping fillings and rice in a nori sheet. It's here that my inexpertise becomes manifest, as clearly my rolling technique needs work. One of Miss B's classmates brings homemade sushi to school every day, and apparently his never disintegrate during the eating process, unlike mine. 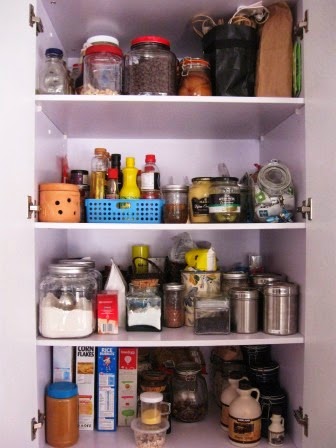 In the interests of focusing on things I can control, last weekend I chose to cope with some of March's WTFery by cleaning out and reorganizing my pantry cupboard. Here is the result - a small island of order in a sea of chaos, but it's like doing 5 minutes of deep breathing exercises just to open it up and stare into it.

And this is rather nice to stare at too. Thanks, everyone! 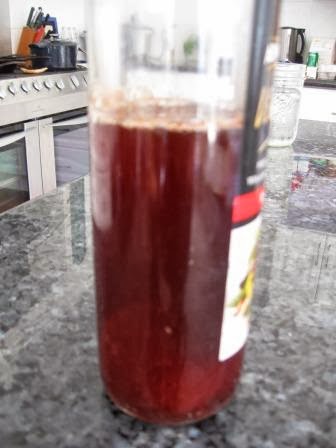 It's pretty hard to see in this photo, but a couple of weeks ago when I pulled this bottle of red wine vinegar out of the cupboard, I noticed a cloudy blob floating in it. My first thought: Yech! Followed closely by my second thought: Jackpot! Because I realized that I had accidentally grown myself a living, undulating mother of vinegar, which are tricky to acquire and are essential to DIY wine vinegar.

Naturally, I immediately set out to make some - emptying vinegar, mother, and some leftover red wine into a crock that I'd been stashing in my laundry room for just such a project. I swirled it faithfully every couple of days, dreaming of salad dressings and fancy pickles, as the laundry room increasingly reeked of vinegar and DP complained. I reassured him it would be worth it, repeatedly...right up until 10 days after starting the experiment, when I took the lid off to have a look at developments and found...nothing. The entire works, including the mother, had disappeared. Evaporated? Soaked into the crockery clay? Who knows? It's a complete mystery. (And such a disappointment!)

I've got another bottle of commercial red wine vinegar in the cupboard, with the lid off, hoping for another mother to manifest. I hear there are other ways, but all of them involve more effort, so I'm going with the slacker's method for now and seeing what happens. Advice welcome. 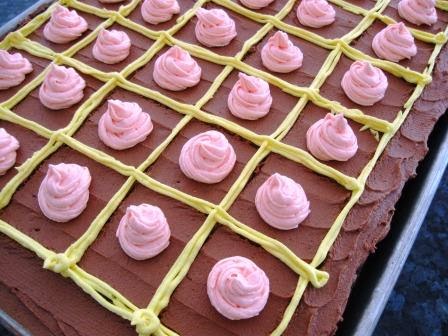 Because I am feeling rather short of words at the moment, have some of Lorde's instead: