RIP Davy Jones. Thanks for the memories of childhood afternoons singing, dancing, and giggling along with you and Mike, Mickey, and Peter.
at 1:48 PM 0 comments

Email ThisBlogThis!Share to TwitterShare to FacebookShare to Pinterest
Labels: history, other details, ww

A couple of weeks ago I mentioned on Twitter that I was taking a Friday afternoon off from my usual work and/or cooking projects to focus on repurposing items around my house. Here’s why: 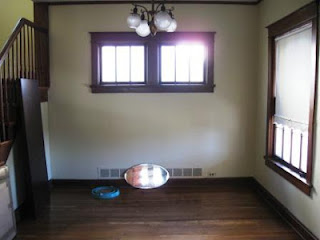 That’s a ‘before’ picture of my front hall. It has looked like that, give or take packing boxes, random piles of stuff, cat toys, and cartons of Girl Scout cookies, since we moved in more than 18 months ago. Not exactly the most welcoming feel for your arriving guests, is it?

Well, I finally got fed up with it. DP had another onslaught of guest lecturers coming in, several of whom were invited for dinner, and I just couldn’t face the thought of opening the front door one more time with that void behind me. Something had to be done.

And lo, my exasperation became my inspiration when, lying awake one night, I worked out how to pull something reasonable together out of various things that I had stashed here and there, waiting to find a permanent location in the home decor.

Here’s what I came up with: 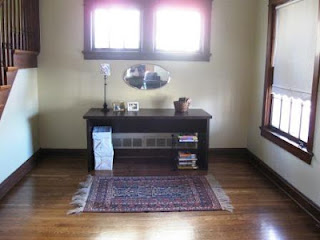 What do you think? I think it looks pretty good. I don’t expect any calls from House Beautiful any time soon, but at least the front hall no longer gives the impression that the house is inhabited by squatters, as one of our more frequent visitors so lovingly expressed it. And the best part is that I spent a grand total of $20.00 - for the lamp base. Everything else you see was stuff that I either already had, or that SP contributed from her renovation stash (namely the Ikea embroidered lamp shade) to fill a gap. SP also contributed an afternoon of elbow grease, after I called her in a tizzy when I couldn’t find the hardware to assemble that piece of furniture: she came over with her professional drill and put it together using hardware from her collection and sheer force of will.

So overall, I feel pretty happy and thrifty. I think I’m going to keep fiddling with the details, though. Suggestions from people who are more designer-y than me are most welcome.
at 10:41 PM 2 comments 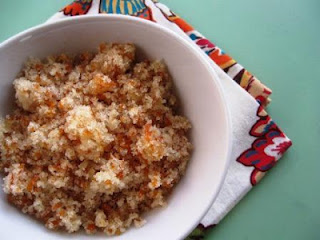 A while back I came across a throwaway line in, I think, a Melissa Clark cookbook, about how making your own flavored salts was easy and so much cheaper than those pricey ones you see in fancy grocery stores.

Well, where I live there aren’t too many fancy grocery stores within an hour’s drive. I have more than once referred to the KC Northland, where I live, as a “cheese desert”. And I had never heard of or seen flavored salts until I stumbled across them in a cookbook written in New York City, like a message in a bottle from a faraway land.

It’s the kind of kitchen project I like best though: you invest a few minutes of time and energy, use a few ingredients that are readily to hand, and produce something that will sit quietly on a shelf, getting better and better, and opening new vistas of flavor experimentation in your food and cooking.

Following Melissa’s example, I made sage salt first, using a few precious leaves plucked from a small but hardy plant that had survived a hellishly hot summer in my backyard herb patch and then flourished in the long, mild autumn that followed. I had been reluctant to use its few available leaves, wanting to save them for something really special; but mincing them into a jar and mixing them with kosher salt meant that they could give their flavor to dozens of dishes. And they have: I’ve gone from being a very occasional user of sage to someone who sprinkles its essence into all sorts of savory dishes. It’s not always distinctive, but it adds something elusive. It makes the food more complex and interesting, even if in a subtle way.

It didn’t take long to recognize that, next to the sage plant, I had rosemary that was not only surviving but flourishing well into an unusually temperate Missouri winter. A jar of rosemary salt soon found a place on the shelf, and I’ve opened up to rosemary in a whole new way. I’ve sprinkled rosemary salt on roast chicken and into batches of applesauce. The other day I used it to season a bowl of Savory Cheddar Oatmeal, an experiment I will definitely be repeating. I would never have thought to add rosemary sprigs to all the things I add a dash of rosemary salt to. It’s easier to be daring somehow when it’s just a sprinkle of salt with a little something extra.

It has grown from there. It’s not even just salt anymore. I’m zesting nearly every piece of citrus that passes through my kitchen: I’ve got homemade lemon extract steeping in the pantry, right next to the homemade vanilla, and I’ve got a jar of tangelo sugar (see photo) whose fragrance could knock your socks off. On a whim, I used it to sweeten a recent batch of raspberry jam that SP described as “like fireworks in my mouth.”

What to try next? I’m thinking Thai chili pepper salt and lime sugar. Suggestions on what to make, or more ways to use these concoctions in other dishes? Send them along to RL Infusion Central. I’d love to hear more.
at 10:23 PM 2 comments 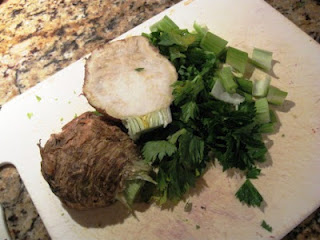 Celery root could be the poster child for the maxim, “Don’t judge a book by its cover.” It’s hard to find anything new to say about its appearance: it’s hairy, it’s brown, it looks unappetizing, and it’s easy to pass over in the produce aisle. I always have. But at this time of year in Missouri, pickings are slim if you’re trying to eat seasonally. Faced with a choice between a hairy, brown but reasonably priced lump or some jet-set produce worth a considerable chunk of my weekly grocery budget, I decided to be adventurous. I bought a celery root, took it home, let it languish in the crisper drawer for two weeks, and then went looking for a way to cook it.

And finished off my food adventure, as usual, by kicking myself over how much of my life I’ve wasted not eating this. 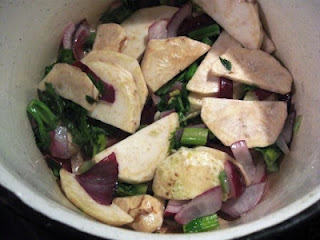 Celery root soup
Loosely based upon a recipe from bluestem: the cookbook

Following my usual soup spec, I peeled and chopped up the celery root (and the attached celery stalks and leaves), plus some red onion. I threw these into the pan to sauté briefly, then added in a couple of cloves of roasted garlic that I had in the fridge. After a few minutes, I poured in about half a cup of prosecco (the last of a bottle sitting on the counter), then put in just enough vegetable stock to cover the chopped vegetables. I brought this to a simmer and let it do its thing for about 15-20 minutes, then went at it with my trusty stick blender. After puréeing it, I may have added a bit more stock to thin it a bit, and then stirred in a healthy dollop of crème fraiche. I finished it off with some salt and freshly ground pepper. In keeping with its origins, it was not the most attractive color—kind of beige—but full of flavor.
at 9:56 PM 6 comments 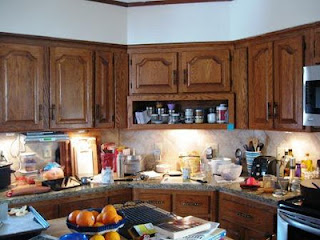