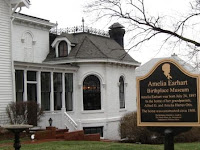 Tuesday: Miss B and I sleep late while DP heads off early for new job orientation. Around midday, check out, pack car. Stop off in town where we are interested in living; drive around, look at house prospect, get lunch at cafe on main street. All looks good. Head off to meet DP's new boss, get an escorted tour around new location and welcome to our new temporary accommodation.

Tuesday, 4:30 pm: Discover new temporary accommodation has no oven, no pans, and no washer/dryer. Start exploring other accommodation options. Go out for dinner--Thai food (my choice, since, have I mentioned, today also my birthday?)! After dinner, go to Borders; DP and Miss B buy me two new cookbooks.

Wednesday: Go to visit potential second temporary accommodation. Discover it is a full apartment (including oven, reasonably stocked kitchen, and washer/dryer), yet cheaper than first temporary location. Book a spot. Locate nearest Toyota dealership and go to look at cars. Commit to buying new Prius within 15 minutes of arrival.

Friday: Visit promising preschool; upon arrival, Miss B whips off coat and starts playing with the pre-K class. (Take this as a good sign.) On the way back to Toyota dealership, pick up car insurance information (along with real estate broker recommendations and other useful local info from very friendly agent). Back at Toyota, fill in approximately 400 forms, pick up car and manage to drive it home (via the grocery store) without anything horrible happening. Go home and collapse, then revive and make bread.

Saturday: Return rental car. Go to view top house prospect (six thumbs up!). Take a jaunt to Atchison, KS for lunch and a visit to the Amelia Earhart Birthplace Museum. Dinner with DP's bosses and their wives. Make more bread to bring along.

Sunday: Nothing scheduled--phew! Have time for Sunday morning pancakes, plus some exploring and some relaxing. Plus preparing for Week Two, hoping return to semblance of normal life continues....

The Question
Can an unreconstructed Bostonian (several years of living elsewhere notwithstanding) find a preschool that doesn't resemble Children of the Corn, some drama-free (and reasonably comptetitive) women's ice hockey, a grocery store that sells fresh cilantro (coriander), and a (permanent) place for my stuff in metro Kansas City?

The Answer
Watch this space.

Email ThisBlogThis!Share to TwitterShare to FacebookShare to Pinterest
Labels: about, kc, move 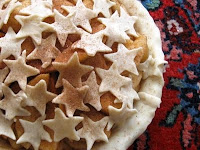 We had dinner guests last night--my brother-in-law D. and his brood, Miss I., Miss R., and Mr. C. D. is an excellent cook, so I always want to be at the top of my game when I'm cooking and he's eating. Yesterday afternoon, I was there: I had a disk of pastry dough and a bag of cut-up apples sitting in the fridge, just waiting to be used. So I made an apple pie for dessert. I even cut out stars for the top crust, for an extra-fancy presentation, and baked it before I left to run a couple of errands. I thought everything was in the bag. I was feeling pretty cocky.

Then I got home late, our guests arrived late, and somehow dinner, instead of being on the table at 6:45 as planned, didn't get served until 7:25. And when I brought out the pie (warm from being reheated in the oven) and cut into it, I realized that it wasn't quite as cooked as it looked. The crust was a little gooey, the apples were a little crunchy. Still edible, but not exactly spectacular.

D. & Co. left around 8:30 to get the kids into bed; we put Miss B. to bed and cleaned up; and I, pouting, put the pie back in the oven. (I had decided that the culprit was the cookie sheet I had put underneath to catch any spilled juice, and it seems I was right--another 20 minutes in a hot oven without it and it was another dessert altogether.)

I, still sulking over my not-perfect dinner, cut another small piece and went into the living room, where DP was starting up the DVD player and checking the news. I, in my clean, safe, well-heated house, full of dinner and carrying a piece of warm pie and a glass of cold milk, glum over my dessert fail, walked in...to see the latest footage from Haiti.

Then I remembered that, if an underbaked apple pie was the worst thing that had happened to me today, I was one damn lucky woman. 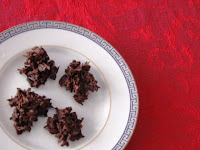 This seems to be the food trend for 2010 among people I know: well, if three people constitutes a trend, that is. But it has given me pause during this Boston stay, since I've been going for a lot of catch-up visits at other people's houses, and my go-to hostess gifts have mostly been cheesy nibbles or bread. At such a time, stymied by being unable to bake almost anything, isn't it heartening to remember that chocolate by itself is gluten-free, as well as (almost) universally beloved?

Coconut clusters
After requesting coconut-toasting tips on Twitter, all of which turned out to be variations of "Don't turn your back on it," I decided to give my slow cooker yet another challenge--which it handled brilliantly. This recipe was entirely based on what I had on hand, as you will see when you read further, and I will definitely be tweaking it when I make it again (which I will also definitely be doing). But it came out pretty fabulous for a first effort.

Lightly grease the inside of your slow cooker, and then turn to high. Dump in coconut and spread out across the bottom. Put lid on askew (this is to keep condensation from forming). Check and stir coconut every 10 minutes or so, until it is toasted a light brown (mine took about 30 minutes).** Remove and set aside.

Immediately drop chocolate into slow cooker. Replace lid askew, and allow to melt (since the slow cooker is already hot, this should be quick--say, 10-15 minutes). Meanwhile, line a baking sheet with parchment paper.

When chocolate is melted, turn off slow cooker and remove lid. Dump in coconut and stir to coat completely with chocolate. Remove clusters with a teaspoon and place on parchment-lined tray. Leave in a cool place to set and harden.

* I didn't feel this was quite enough chocolate, so will probably increase next time.
** The coconut gets drier (of course) and thus crispier as it toasts, so I'm going to experiment with getting a balance of toasted and still-chewy coconut. I think this will be easier to do using the slow cooker method, since I had to move everything around to make sure it toasted evenly: if I don't, I'll get some texture variation. 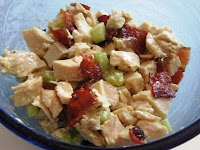 I didn't manage to order my turkey until the Monday before Christmas, about 12 hours after I arrived in Boston. I was a little tense about that. I mean, I know I could've picked up a frozen Butterball at the supermarket, but I wanted a fresh turkey. I'm picky that way.

So anyway, by the time I called (8am on Monday morning), the woman at the butcher shop told me that all they had left was a 15.5-lb (7-kg) turkey. So I took it.

Then I fretted. Would that be enough meat for 12 people? Would it be skimpy? Would we--horror of horrors--run out?

(All the while conveniently overlooking that one of the diners is five, one is a vegetarian, and four would be leaving to eat another Christmas dinner three hours after eating mine.)

You know where this is going: even after everyone eating their fill, and sending a third of the guests home with doggy bags, I was still left with pounds upon pounds of leftover turkey. I finally finished it off today (those of you with food safety concerns, look away now), after having made the following:

1. turkey stock (after removing the aforementioned pounds and pounds of meat from the carcass);
2. turkey risotto (made with the turkey stock and chunks of meat);
3. several plates of leftover turkey and fixings;
4. several more turkey sandwiches;
5. turkey pot pie (involving more turkey chunks as well as more turkey stock in the sauce: one full-size for dinner, two mini, frozen for later);
6. and today, a twofer, to put an end to the madness: for dinner, turkey bolognese; and
7. for lunch, turkey salad sandwiches.

Old school turkey salad
Note: the smaller you cut everything, the neater the end product will be. I like mine chunky, so as a result half of it fell out of the sandwich. I did not care.

Mix all ingredients together thoroughly. Eat straight from the bowl or serve as a sandwich on slices of toasted white bread (with pickles and chips alongside, natch).

PS If anyone wants recipes for the other turkey items, do say so; otherwise, I'll assume that by this time everyone else feels like being done with turkey also.

* Translation: "turkey all the time".
** I used the last of the batch of homemade mayonnaise I made last week. More on this later. 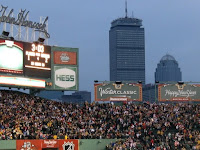 One of the things I missed about the northern hemisphere while I was in Australia was Boston winter. Yes, you read that correctly: cold, snowy Boston winter. Not, I hasten to clarify, damp, grey, raw Oxford winter, of which I had more than my fill in the years I lived there; but Boston's snowstorms and short days and wind chills are ingrained in my biorhythms.

Besides, winter has its compensations, the biggest of which for me is ice hockey. And if I can't be playing it (which I can't, since my kit is in a box somewhere on its trek from Canberra to Kansas), then I'll take watching it any day. But especially today, because today was the Winter Classic.

The Winter Classic is a fairly new but already beloved National Hockey League tradition, where one regular-season game is played outside, usually in a baseball or football stadium. It started in November 2003 as the Heritage Classic in Edmonton, and from 2008 has been played on New Year's Day, each year in a different city. This year's game was held in Boston, featuring the Boston Bruins versus the Philadelphia Flyers, at Fenway Park, the legendary home of baseball's Red Sox. I had been secretly yearning to go ever since I heard the announcement, but I had also looked at the ticket prices, which made me feel faint. I got busy with the move and Christmas, tickets started selling on eBay in the four-figure range, and I organized plans to watch the game on TV.

But I had forgotten to factor Santa (and his elves, some of whom it turns out we're related to) into the equation, and last week DP and I found ourselves the recipients of two coveted seats. This morning I bundled myself three layers deep, as if I was going skiing; we dropped Miss B off at my sister's for the day; and off we trekked to Fenway Park, surreally decked out in Bruins black & gold for the day and full of boisterous, exuberant fans in hockey shirts and tuques. The temperatures were fairly mild (no wind chill!), the atmosphere was great, and the Bruins even managed to win the game at almost the last possible minute--a pretty fabulous introduction to 2010. I hope it's a harbinger of things to come.

Wishing you all a very Happy New Year, and a 2010 full of good things!