Well, that was an unplanned hiatus. Here’s a quick recap of key events since my last post: 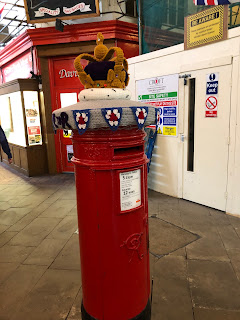 The month of June was dominated by a two-week trip to England which was a combination of work and holiday. We were mostly in London, with excursions out of town on the weekends. The highlight of these was a trip to Oxford, our former hometown and Miss B’s birthplace, where we caught up with various friends and revisited old haunts. These included my favorite place, the Covered Market, here still sporting some yarnbombing to celebrate the Queen’s Jubilee, which had happened in May. 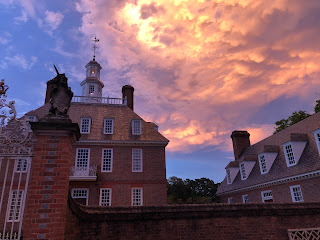 Speaking of Miss B, the theme of July was some big life stuff happening for her. One thing involved her being away for most of the month, on a three-week pre-college course that enabled her to delve into her love of history and start getting a taste of university life in an extremely historic location (as well as help her parents start preparing mentally and logistically for the next phase). 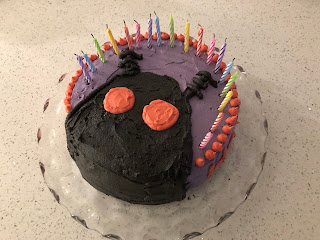 She finished up right at the end of the month, just before a milestone birthday. Luckily not yet too old for a themed cake though! 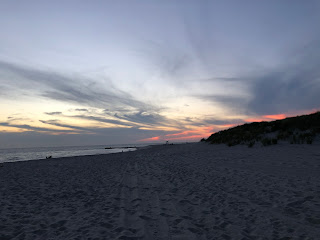 We kicked off August with our final major event of the summer, our annual jaunt to the coast. This is our fourth year at Cape May, and we love it as much as ever - plenty of sun, lazing by the ocean, and New Jersey farmstand produce. 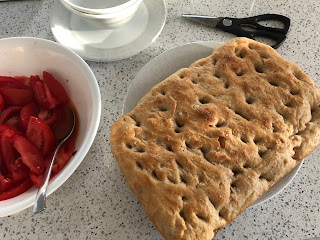 My cooking highlight this year, to make the most of some great local tomatoes, was a MacGyvered focaccia. I made the same basic bread recipe that I always make, then after letting it rise I gave it the focaccia treatment - i.e., spreading it in a baking pan with lots of olive oil, poking dimples in it with my fingers, sprinkling salt on it, and then baking it. It was yummy, and since then I’ve continued to work it into the regular bread rotation.

This rotation has gotten more regular as August shifted into September, because along with other transitions, I’ve made some changes to my work commitments which I’m hopeful will allow for better balancing of priorities across multiple areas of life. 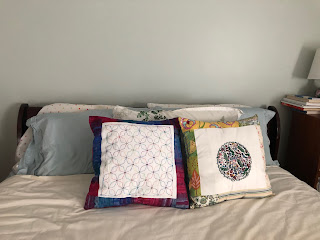 I posted a picture of the pillow on the left on Instagram a few weeks ago, describing it as “turning anxiety management (handstitching) into home decor”. Ideally (among other things) I’d like more of the handwork and less of the anxiety. 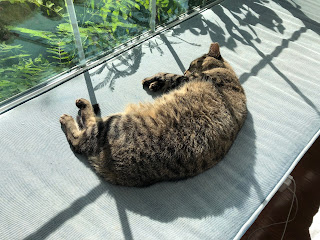 I'm not quite at this point, but it's something to aspire to. More to come soon, I hope, and that your anxiety is minimal and your contentment maximal in the meantime. 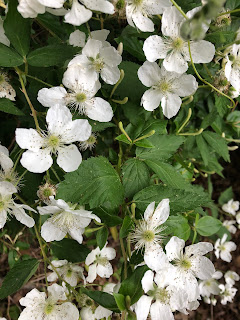 A while back I learned a technique from a counselor: I was struggling to deal with a crisis situation and she asked me to start processing by listing five emotions that I was feeling in that moment. At the end of the session, we revisited that technique, and she recommended it as a tool to help start the process of navigating difficult emotions. It's a tool I've continued to use. So here’s what I’m feeling today, if I try to think about pretty much anything outside my own little sphere:

I don’t feel able to write anything about everyday events like food or gardening or holiday weekends because it seems so cluelessly trivial in the context of the bigger picture of what I see happening in the US and elsewhere. I know it’s important to stay in the present, in my own reality, and not get swept up into the surging currents of events on social media, and food is one of the ways that I keep my feet on the ground. But right now the luxury of being able to mull over what to make for dinner, or what’s on the schedule for this week, feels like an impertinence; how can normal life for anyone continue in a world where things like these can happen?

And yet it must. We must not give in to despair, to the forces of darkness. We must take action as we can: Make a donation. Call an elected representative. Hug our loved ones. Hold a thought for those who are devastated. Keep putting one foot in front of the other, remembering that every day that we draw breath on this earth is a privilege and a responsibility. Keep helping each other along.

Donate or take action in your community (US)

Find your members of Congress (US)

Email ThisBlogThis!Share to TwitterShare to FacebookShare to Pinterest
Labels: other details

I know that I have infinite company in feeling that the roller coaster of the last two years has thrown this balance off completely, that the mental load that work entails has expanded to encroach into every corner of brain space, with attending consequences for mental and physical health. Re-establishing boundaries, especially for myself, is an ongoing challenge and a necessary one. Here are some things that have helped recently with re-balancing the scales: 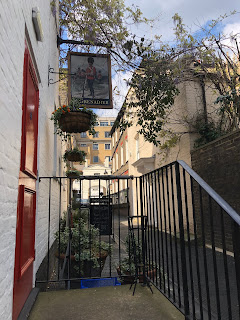 Getting out of the house and going somewhere different - in this case, London. After being entirely confined to the BosNYWash megalopolis for nearly 3 years, I got on a plane with my family and went to a different country altogether. We took Miss B to some of our favorite London spots and thoroughly enjoyed the change of scene. Oh, and we got to cheer DP on as he won an award in his field, which put a very nice finishing touch to the excursion. 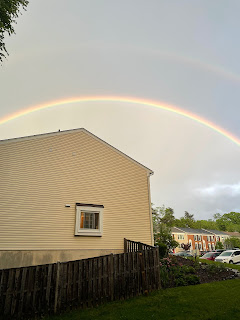 Welcoming visitors - two of my sisters came to visit, also for the first time in nearly 3 years. It was such a refreshing change; we took a break from the regular routine to do touristy things with them, as well as making the most of the time together with lots of walking, chatting, and eating. We spotted this rainbow as we were lingering at the dinner table one evening - I doubt I'd have noticed if it if I'd been doing my usual daily round. 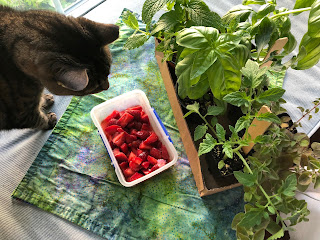 Making time for hobbies - these breaks from the routine reminded me that I don't have to wait for other people or events to provide an opportunity to take some time to focus on things other than work. In addition to my usual food purchases at the farmers' market this weekend (including some spectacular strawberries, see above), I also picked up some tomato and herb plants to grow on the back deck - an addition to the daily routine that I hope will supplement both diet and quality of life.