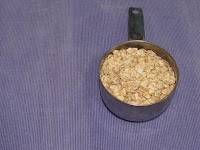 Today is June first, which means that the first official day of winter in Australia is less than three weeks away. The weather has been seasonally chilly in Canberra (even occasionally grey), the heat is on, and the wool sweaters are out, all of which have turned my thoughts to the kind of food that sticks to your ribs. Which really means that it’s time to start eating oatmeal for breakfast again.

I don’t think I ever ate oatmeal, or even oats, the entire time I was growing up. In fact, I would venture to say that my mother has never kept oats in the house, doesn’t know how to make oatmeal, and can probably count on one hand the number of times she has eaten oats in any form. (They’re not really part of the Italian-American culinary repertoire. My mother’s idea of a hearty breakfast is an egg. Every day. But that’s another story.) So when I took notice of oats, I was already an adult, and brought no prejudices of any kind to the encounter.

Having said that, I can’t remember when or how I got interested in oatmeal. I'm pretty sure it was while I was living in England, thanks to a) a climate that positively compels consumption of rib-sticking foods for much of the year, and b) a culture in which porridge (that's what they call oatmeal) is an unvarying refrain in any discussion of a healthy breakfast, especially if it involves children. However it came to my attention, it seemed like a good candidate in my never-ending quest for Breakfast Foods That Don’t Leave Me Ravenous for a Snack at 10:30AM.

I consulted various sources on how to make it, and cooked up a bowlful for breakfast one morning. It was definitely filling and hearty; the only problem was that I didn’t really like it. It was mushy and bland, and whatever I had put in it to sweeten it up hadn’t improved it much. But I was impressed with its rib-sticking qualities, and pressed on, experimenting with various ratios of oatmeal to liquid, fiddling with the cooking times, and trying all sorts of things to flavor it: sugars, maple syrup, cinnamon, dried fruit, fresh fruit, cooked fruit. Nothing. I couldn’t find a way to make oatmeal that I didn’t end up choking down, feeling virtuous but unsatisfied.

Then one day, about four years ago, it occurred to me that maybe I should be taking this in a different direction. Oats are just a grain, right? Like pasta or rice or bread? Who says they have to be sweetened? Why can’t they be savory? Since I’m generally a salt person, rather than a sweet person, maybe I’d like them better that way?

I cooked them using more or less the usual method, but this time I seasoned them with salt and black pepper and sharp cheddar cheese. I’ve been eating them for breakfast that way ever since. Sometimes for lunch too. And every single person I've told about it has looked at me like I'm insane.

Imagine my surprise when I saw that Mark Bittman was going in a similar direction a few months back.

Savory Cheddar Oatmeal
I’m pretty sure this oatmeal is inauthentic in every way. Besides the flavorings, it’s also extremely lumpy and has quite a bit of texture to it. I’m not sure, because I’ve still never really eaten oatmeal, except what I’ve made myself. And this is the way I like it.

Combine oats and milk in a small saucepan, and bring to the boil. Lower and simmer, stirring regularly so it doesn’t stick, until all the liquid has been absorbed and the oatmeal is lumpy and thick. Stir the cheese into the hot oatmeal so that it melts; season with salt and pepper and stir some more. Eat immediately.

Keeps 1 hearty eater from snacking until a reasonable lunchtime.
Pin It
at 7:37 AM

You know, the first time I saw someone eat grits for breakfast, she dumped a huge handful of cheddar and a giant scoop of salsa on top, and I thought, that's just the freakiest looking breakfast I ever saw.

But you know what? I copied her then and there, and it was DELICIOUS.

Now grits aren't oatmeal, but they're close enough in my book.

You know, now that you mention it, grits might actually have been my subconscious inspiration for this. Because I tried them once in a restaurant on a trip to North Carolina, and thought they were unbelievably tasteless and why would anyone like them. And the friend I was visiting said, "Well, they're a lot better with cheese" and I thought, "For breakfast? Interesting." But up until now, I had not connected the two things.