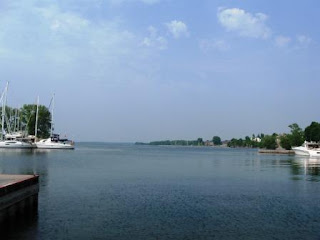 After covering nearly 1100 miles in our first two marathon days of driving, we've taken it a bit easier the last two, covering a (comparatively) measly 400 miles. Yesterday we cruised along the back roads of northern New York state to spend Memorial Day with friends who've recently relocated to a scenic town on the shores of Lake Ontario; they treated us to a classic American cookout, since this will be our last holiday in the US for a while. Burgers and dogs on the grill, devilled eggs, and potato and bean salads; plus possibly the best homemade salsa I've ever had; the best cosmo, hands down; and Italian-coffee-bar-worthy coffee this morning to wake me up after last night's festivities. It was just what I needed after an overdose of mediocre road food.

Today we headed north again, crossing the border into Canada, and heading for DP's old stomping ground: Montreal, because he can't get within 200 miles of the place and not drop in. He did two of his degrees here, so it was his second home for a long time, and my regular weekend and vacation destination. We wandered around the old neighborhood, showed Miss B some of the landmarks of our student years, had some really good Chinese food for dinner, and even found my favorite Canadian sweet treat (cannelle classique svp!) for a surprise dessert. Definitely a worthwhile detour.


Packing and loading have been successfully completed, and we're now on to Phase 3: driving cross country to Boston for a visit before heading overseas, dropping in on various people along the way. We left Missouri yesterday heading east, and crossed Illinois and Indiana; then stopped overnight in Louisville, Kentucky to catch up with friends we haven't seen since we were all living in England 13 years ago. Then today, after a leisurely and tasty breakfast, we turned northeast and trekked across Kentucky and Ohio, a corner of northwestern Pennsylvania, and into upstate New York, stopping for the night in Buffalo.

Breakfast was the high point of the day, eating-wise; if you want to eat well on US road trips, you either really have to do your homework before setting off, or else be prepared to wander off the beaten path. I ran out of time to do the homework, and with 500 miles to cover today, there wasn't much wiggle room for wandering. Luckily the schedule eases up from tomorrow, so I'm hoping to have some eating adventures to report soon. Until then, I'll be relying on the Mother of All Road Trip Food Bags to provide treats. 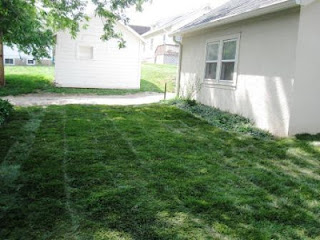 A surprise diversion in the midst of my two-day moving extravaganza came this morning, just when I was expecting the truck and loaders to arrive. Instead I got the sod guys, who we finally got around to scheduling to repair the damage done by having the sewer pipe replaced back in March. They had told us to expect them early next week, when we would have already been on the road, but then they found a chunk of time to fit our little job in today. (They were on their way to re-sod a baseball field next - quite a bit bigger (and more lucrative) than my back lawn!) It was such a treat for me to see it like this; after 2+ months of looking at a dried-out mud plain, today I could look up from my labors and refresh my senses with the sight of a lush, velvety carpet of green. It made the back yard look very inviting, and made me feel very sad that I wouldn't be around to enjoy it fully this summer. And it highlighted one of the big lessons I'll be taking away from living here: don't wait until you're getting ready to leave to make your house look its best so you can impress other people. Make it look its best so you can enjoy it while you're there. Something I'll try hard to remember, and apply, when we find our next house and all our stuff reappears. 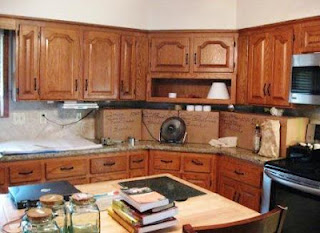 I am now officially kitchenless - for the time being, anyway. The packers have been here since this morning, and are in (I hope) the final stages of putting all of our belongings into boxes. They're coming back tomorrow to load everything onto the truck and take it away, and then we'll hope to see it again, in more or less its original form, in Canberra, in 3 months or so - assuming that it clears customs without difficulties (fingers crossed) and that we have found a house to have it delivered to (fingers and toes crossed).

Thus begins Phase 1 of our Great Trek from KC to Canberra....more updates to follow.

And to think I toyed with the idea of making May a #NaBloPoMo month! Ha! I kill me!

I do have an actual recipe to share shortly, but since I haven't managed to post anything substantive in about two weeks, I thought a brief update was in order first:

Move organization the movers have been booked and, mercifully, are required to do all the packing for international moves. So I am focusing on trying to organize things, weed out anything that probably shouldn't be shipped 10,000 miles, and separate out things that we are likely to need while we are in transit and when we first arrive, so I can hide them from the movers but we can still use them. I currently have six different To Do lists from which I pull items for a manageable daily list, because otherwise I would need to spend too much of my time breathing into a brown bag.

Living arrangements our house here is on the market, but so far no one has shown the slightest interest in purchasing it. So it looks as though we might be trying to get some renters in. (If you know of anyone looking for a lovely 4BR house in the Kansas City Northland, do send them my way, won't you?) Meanwhile, we have secured a place to stay in Canberra, at least in the short term. It will give us a base to find something more permanent and, more important, is in the same neighborhood where we lived before and want to remain, so that we're in familiar territory and Miss B can go back to the same school that she attended in 2009.

Miss B lost her sixth tooth yesterday and finished school today. Now she gets a few weeks off before jumping back in, partway through the Australian school year, which runs from late January/early February to mid-December and thus is already underway. We continue to discuss mixed emotions on a near-daily basis, as she is simultaneously sad about leaving behind her school/friends/cats/house here, and excited about the prospect of being back in Canberra, and seeing the friends and family we'll be visiting on our roundabout way there.

DP work, work, work, work, farewell dinner, work, evening conference call with Australia, work, farewell lunch, work, work, work. In his spare time, he is coordinating the itinerary for our cross-country drive to Boston at the end of the month. Oh, and we hosted an end-of-year party for his seminar students last weekend--26 adults and children, including us. (The smash hit of the buffet table was the sausages, which I had rolled in olive oil and roasted in the oven. Something to remember the next time I contemplate cooking anything complicated.)

Food I have more or less stopped buying food, other than things like bread and milk, and am trying my best to either consume or give away everything edible that is still in my house. If you can think of any creative ways to use a bag of spelt flour, a jar of sesame tahini, four different kinds of cheese, and/or a canister of Cajun spice in the next 10 days, please share! Oh, and even though I stopped buying pasta about 2 months ago, I still haven't run out yet. I know, shocking, right?


I finally saw Slumdog Millionaire on the plane home from Paris two weeks ago, and it--particularly this song--has been stuck in my head ever since. Just the thing if you need a little endorphin rush.
at 10:14 PM 2 comments

Email ThisBlogThis!Share to TwitterShare to FacebookShare to Pinterest
Labels: other details 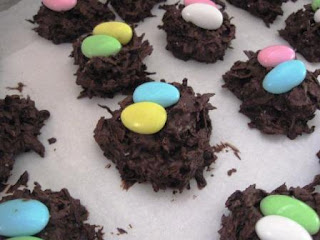 I realize I've now posted more than once about coconut clusters, but in adapting them into Easter nests, I made some refinements to the recipe that are worth noting:

1. In particular, I determined that a ratio of 2 parts chocolate to 1 part coconut (by weight) was optimal for getting the right balance flavor and texture. So, for the enormous crowd we were expecting, I used one 14-ounce (400g) bag of sweetened coconut, and about 28-30 ounces (800-850g) of dark chocolate.

2. When everything was mixed to my satisfaction, I scooped out lumps with my cookie scoop (like a mini ice-cream scoop, about 1 inch/2.54 cm across), dropped them on a parchment-lined baking sheet, and let them cool for a bit.

3. Then, while they were still soft, I sprinkled them very lightly with kosher salt and pressed two jordan almonds into the top of each one.

Voila--Easter nests! A very, very rich and grownup version of my favorite Easter candy of childhood. It's so comforting to know I'll be able to have these next year, when I'm no longer 20 miles from a Russell Stover outlet (more like 9,000).
at 10:33 PM 2 comments 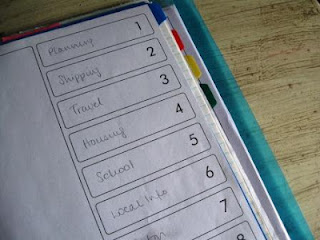 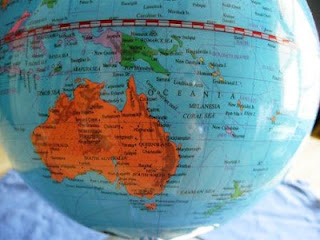 I have been trying to figure out how and when to put up this post for about six months now.

First, because it seemed too soon and too far off from impending events. Then, because I didn’t want to jinx myself in the midst of complex bureaucratic maneuverings. And finally, because I kept hoping some clever way of making the announcement would suggest itself. But I think I have run out of options…and very nearly out of time.

If any of you have been reading this blog since the beginning (or have gone back through the archives), you will know that the life event that first brought it into existence was my move to Australia in September 2008. I wanted to document that once-in-a-lifetime experience as it unfolded.

Or so I thought. Because it turns out that we’re moving back.

(As one of my friends responded when I told him, “Who moves to Australia twice?”

That would be me, apparently.)

It’s been in the pipeline for a long time—there were very preliminary discussions about a more permanent role for DP while we were still living there in 2009—but now nearly all the moving parts have come together, and a few days ago the real estate agent came and put a sign out in front of our house. We’ve got just under a month left here in Missouri before we head back to Canberra. I’m back from my Paris trip, which was my last mental hedge before moving fully into transition mode—gearing up to show the house, get estimates from movers, buy plane tickets, fix firm dates.

It feels real now. And taking up the majority of my conscious brain space. I can’t not blog about it any more. So, to sum up without benefit of catchy narrative devices, my news is as follows:

I’m moving back to Australia at the end of May. I’m excited and terrified. I hope you’ll come along for the ride.
at 12:55 PM 12 comments