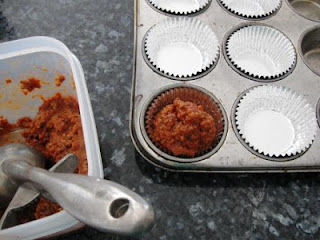 Have you heard this term? I’ve come across it repeatedly in the past six months, but before that I’d never heard it. According to Wikipedia, it is used “to describe innovations that improve a product or service in ways that the market does not expect” – particularly in business or technology. Naturally I’m planning to appropriate it for cooking.

I mentioned a while back that I’ve started volunteering in the school canteen one morning a week, because I want to do my bit for the school community, and focusing on something involving food is the obvious first choice. Through working in the canteen, I’ve already learned the finer points of rolling sushi, making vegemite sandwiches (trickier than it sounds), and, most recently, a whole new approach to making bolognese sauce.

Spaghetti bolognese is one of the standard items on the canteen menu, and a few weeks ago, the manager-mother of the day was cooking a big batch of sauce while the rest of us worked through the list of daily canteen chores. She mentioned in passing that she doesn’t brown the mince for bolognese sauce anymore, thanks to a tip from her sister-in-law; according to her, skipping this saves a step and completely changes the texture of the sauce – for the better.

The other day, when I had literally five minutes to get something into the slow cooker for dinner, I remembered this piece of information, and decided to test it out for myself. I turned on the slow cooker, emptied in a jar of passata, and tossed in about a pound of mince I had sitting in the fridge. I clapped on the lid and went about my business. A couple of hours later, I was able to check and stir it for the first time, and used a potato masher to break up the mince lump. By dinnertime, the sauce had been cooking for about 2.5 hours on high, and the house smelled wonderful.

The texture and taste of the finished sauce were noticeably different, as promised: the texture was much smoother than usual, and the taste very rich and meaty. Whatever flavor might have been lost by not browning was more than made up for by how robust the finished sauce came out. I would never have come up with this idea on my own, but I’m happy to adopt it.

Disruptive bolognese sauce
I’m sure this would be good with sautéed onions, grated carrot, minced garlic, and all the other accoutrements that help to build a really good sauce, but this was how I made it, and it was delicious out of all proportion to the work involved.

1 23 oz/700 g jar tomato passata
1 lb/450 g good-quality beef mince (I used the grass-fed, hormone-free, gold-plated mince I got at the farmers’ market, which I’m sure contributed to the excellent flavor of the sauce)
1 heaping Tbsp/30 g pesto
salt & pepper

Turn slow cooker to high. Add passata and beef. Cook for 2-3 hours on high (maybe 3-5 on low?), stirring once or twice to make sure that the beef mince is broken up and incorporated into the sauce. Just before serving, stir in pesto, and season to taste with salt and pepper.

Makes enough to feed at least 4 people spaghetti bolognese. Leftovers freeze very well, using the method shown above.
Pin It
at 9:05 AM