Sixteen years ago today I was in the intensive care unit of the John Radcliffe Hospital in Oxford, preparing to go into surgery for a caesarean. I was 26 and a half weeks pregnant, and definitely not prepared for any aspect of what was happening or what was coming.

That day, the focus of my life changed forever. Through 225 days in hospital, followed by four international moves, nine houses, three continents, and more air miles than I have the energy to count, she’s been at the center of every day. Being her mother is the most important job I’ll ever have.

We haven’t been able to have any big celebrations this year, but she doesn’t really mind that. She’s had the opportunity to do some of the things she likes best - hang out with a good friend; work on her writing (alternate universe/historical fiction/horror is the current genre I believe) and her drawing and her graphic design; snuggle her fat cat; and eat her fill of french fries for dinner, followed by birthday cake decorated with her theme of choice - this year reflecting the love of history that she shares with her father.

Even in the midst of...everything...the adventure continues. Wishing the very happiest of birthdays to my smart, funny, kind, inclusive, creative, and inquisitive daughter - the mighty Miss B. 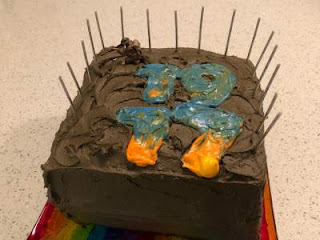 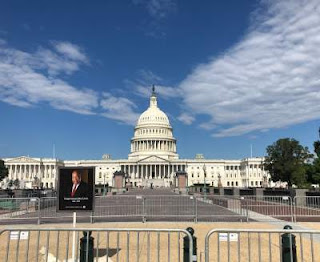 Yesterday I went into DC for the first time since March 10, to join thousands of my fellow citizens lining up to pay respect to Representative John Lewis, one of the leaders of the US Civil Rights movement in the 1960s and a longtime member of the US Congress. I went to express my gratitude, respect, admiration, and remorse. As an American, I’m profoundly grateful that Representative Lewis, before I was even born, was putting everything he had on the line to make this country a better place. And also as an American, I’m deeply ashamed that it was necessary then, and that the struggle for justice has not yet been won.

My personal history is one I refer to often here: I’m a descendant of immigrants, most of whom came to the United States about 100 years ago. Their backgrounds, experiences, and decisions have shaped my life, from where I grew up to the kinds of food I cook and talk about. They came from what would have been considered “shithole countries” at the turn of the twentieth century; they were often viewed with suspicion and disgust, if not actively discriminated against.

And yet - even with all those challenges and obstacles in their paths, my forebears were already better placed, the moment they stepped off those boats from Europe onto a Boston pier, than some Americans whose ancestors had been here at that point for three centuries. It took me a long time to understand that - to recognize how the typical US immigrant story relates to the larger story of how this country was born and grew. And how those systems, which were put into place in the seventeenth century and were none of my doing or of anyone related to me, continue to benefit me and mine to this day - all too often at the expense of other Americans who are no less entitled to the blessings of liberty.

A long time ago I wrote about the struggle to know when to deviate from writing about food. It’s part of the reason I haven’t been on here much for a while: talking about food seems so inconsequential compared to a nationwide struggle about justice, and what that looks like, and what any one person’s role is in that struggle. But maybe they are more related than I realize: they are both fundamental to our survival, after all - wherever and whoever we are.

This is my little platform, so I’m going to keep talking about what I think is important and is occupying my mind. I’m going to try to follow, a little more publicly, Representative Lewis’ encouragement to “make good trouble.” My first-generation American mother taught me long ago that the primary purpose of this life is to try to leave the world a better place than you found it, and I can think of no better example of someone who tried to do just that, and who devoted his entire adult life in service to his nation. His life and legacy are an inspiration and a challenge to anyone who cares about the society and the future we are building, by our beliefs and actions, every day. Email ThisBlogThis!Share to TwitterShare to FacebookShare to Pinterest
Labels: other details, politics 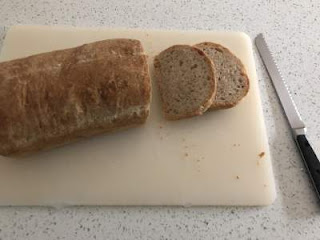 We’ve been in quarantine for nine weeks. I still haven’t made a sourdough starter.


I’ve been reading blog posts and seeing social media photos for years showing other people’s amazing sourdough loaves. The pace at which these appear has ratcheted up significantly over the past two months as quarantine sourdough has become trendy.


Every time I see one of these, I think, maybe I should finally do it. I should commit. I already know how to make bread. I love sourdough. I could have all the sourdough I want. I should do it. Everybody else is doing it.

So I read the recipe again. And then I think the same thing, every time: it seems like so much work. You have to know you want to make bread, like, two days ahead of time in order to feed the starter enough to be ready, and you have to start the actual bread dough not much later than that.


And the thing is, I already make bread all the time. I always have bread dough in my refrigerator. I can pull it out and make homemade rolls for dinner on a whim, and when my dough container starts to look empty, I can whip up a batch of slow-rise bread in about 5 minutes in the morning or afternoon and have freshly baked bread the same day. I use the same dough to make pizza, pita bread, and recently, bagels. I always keep the end of the previous batch to act as a starter for the next batch, so it’s an integral part of the cycle in my kitchen.


On Sunday morning, I woke up unusually early - my anxiety has been manifesting in weird ways during quarantine, and periodically waking up extra early has been one of the weirdest - wanting to make a pan loaf of bread. What Miss B calls a “toast loaf”. I already knew I had a big batch of dough in the fridge that I’d made the night before (using my standard recipe), so I went downstairs, ripped off a chunk of it, shaped it into a loaf, and dropped it into a small loaf pan that I’d greased and floured. I let it rise for over an hour until it had doubled in size, and then put it in the oven to cook while I was making Sunday breakfast.


It doesn’t look all that impressive, and it’s certainly won’t be confused for an artisan loaf. But it tastes good, and it does the job. And it’s a reminder that having the time, the ingredients, and the resources to make any bread at all is a privilege, now more than ever.
at 7:48 AM 0 comments